Interview with the current and new Bend Brewing Co owners 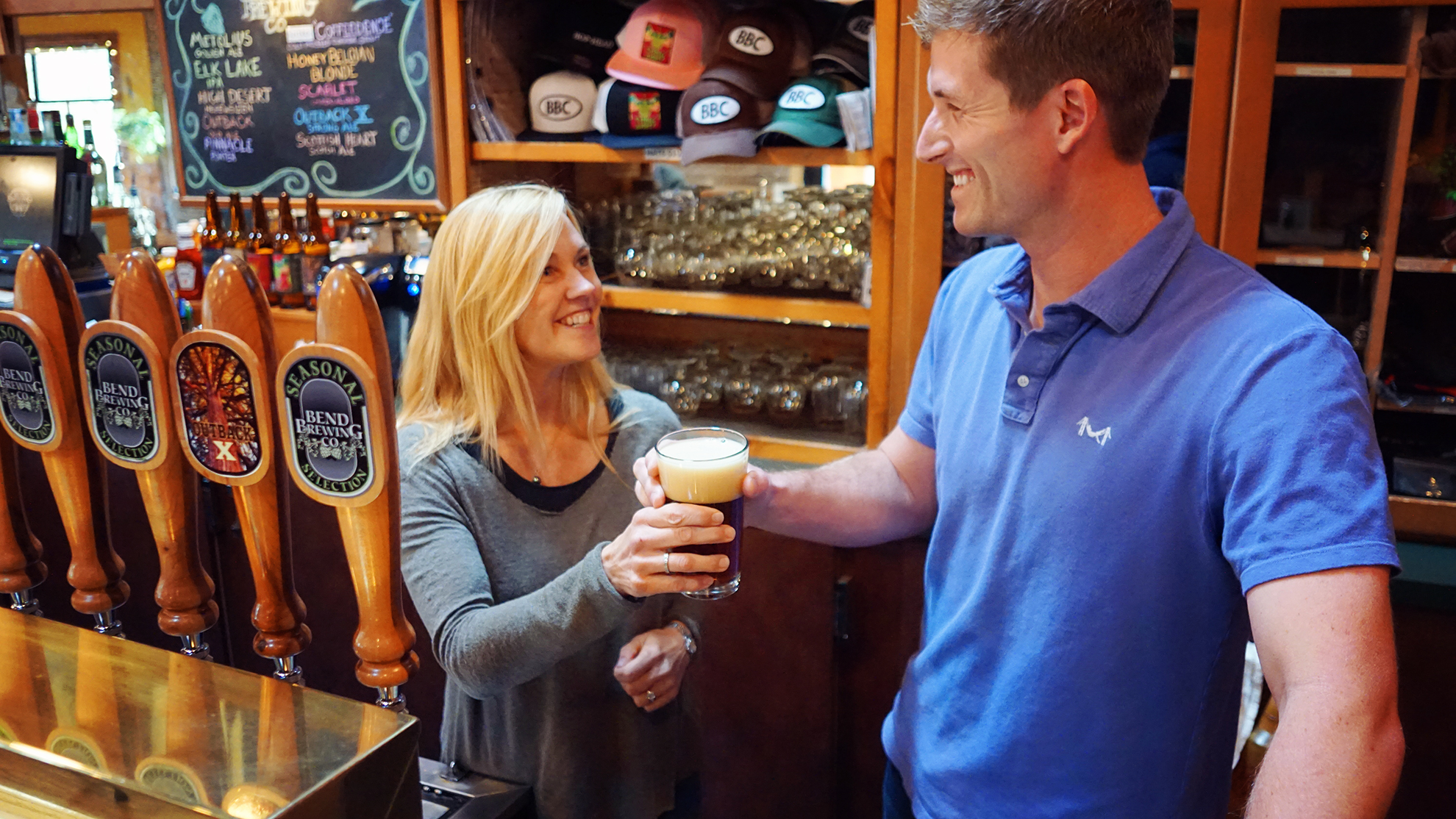 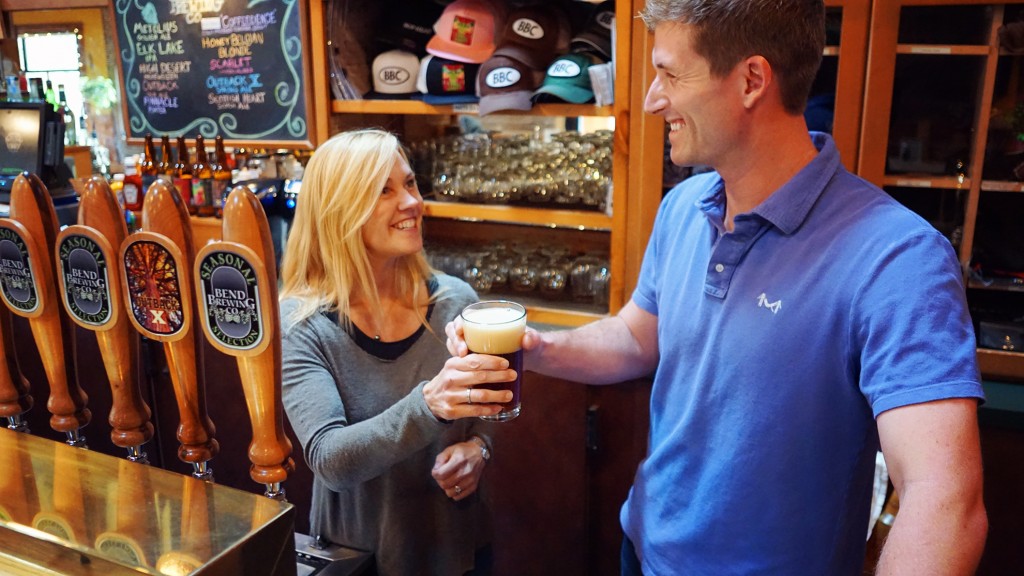 As I cruised in to the BBC, it was clear that all’s well at this long-time Bend establishment. Even though it was a bit past the typical 12p-1p lunch hours, the place was busy and people were propped up at the bar enjoying pints and pub fare. My visit this time around however was for more than throwing back a pint or two, it was specifically to conduct an interview with the current and new owners – and to drop off a keg of Ian Larkin’s finest that had recently been “kicked”.

I noticed Wendi Day behind the bar with a some papers in one hand and the phone in the other – she glances over smiles to acknowledge my arrival. I also notice a not so familiar face shadowing the barkeep, getting some instruction on the POS system – turns out it’s one of the new owners.

Full disclosure: The BBC is my go to brewery in Bend. The beer, the people, and the location just make it easy for me to walk downtown take a right on Brooks and have a friendly neighborhood pint. And as I have mentioned before one of the three reasons we moved to Bend long ago. Big thanks to Wendi and Packy for their time on Monday, Leslie was not present during the interview.

Beer me Bend (CP): Packy what’s your story?
Packy Deeniham (PD): I went to Oregon State University from ’04 to ’08 then moved to Bend for just about two years where I first was a lift operator at Mt Bachelor, then started a crêpe cart in town – Crêpe Affair – we’d be right in front of Bellatazza downtown, farmer’s markets, and concerts, but it was such a seasonal endeavor from June to August it just couldn’t sustain itself full-time.

I still wanted the mountain vibe and get a career going so I moved to Denver on a whim and ended up there for five years.

CP: Where you met your wife and now business partner?
PD: Yep, she [Leslie] was going to CU Boulder, had a bunch of friends in Denver, and met her through one of her friends where I was working. Turned out she was a big skiier, and I’m a boarder, so we went on a date to Keystone, she kicked my butt on the mountain, and ever since we’ve been together.

CP: Nice! How’d you end up back in Bend?
PD: It’s always been the goal to get back [to Bend] since the day I left. The only reason I left was because of the tough times in ’08 and ’09, I really tried to make it work.

CP: So now you’re back. Good timing! Why the BBC?
PD: I think it’s really the tradition of BBC. First and foremost it’s got a great name, its reputation is fantastic, and ever since meeting Wendi, her father, and Rob [Wendi’s husband], it seemed like a natural fit. I’m extremely proud of now being part of the BBC, especially working with Wendi. I can’t imagine a better situation for myself, Leslie, and my dad to be in. Taking on a brewery with great quality of beer, food, and people, everything is awesome. There’s so much opportunity here and I’m pumped to get going on it. Being 29 and coming into this situation is a best case scenario.

CP: Did you contemplate starting your own brewery before purchasing the BBC?
DP: We looked into starting a brewery, but we didn’t put much thought into it once we heard Wendi would be interested in talking with us – This was a dream come true for us.

CP: Did it take you by surprise that someone was looking to buy your brewery?
WD: Yeah. Over the years I’ve sat down with a handful of people that were more interested in the properties next door and their potential opportunities. But when I met them [Packy & Leslie] and their family, that’s when I realized maybe I should really think about this. It’s been fifteen years since I’ve owned the BBC and was ready to have two to five more years here – We just had our Twenty Year Anniversary. I really like their family, so I talked with my dad [Jerry Fox – BBC founder] a lot about it. It just seemed like everything was happening for a reason and I felt comfortable that working through the transition I would be able to impart all my information to Packy and Leslie. I became confident that selling to the Deenihans was the right decision.

CP: What’s your experience in the brewing industry?
PD: I really like craft beer. I’ve never been in the craft beer industry, but will be bringing my business acumen, my father’s business acumen to BBC and learning as we go. I don’t have any brewing experience, but we have some of the best in the industry upstairs, and I’m excited to learn from them.

CP: Do you see any parallels between your family and the Deenihans?
WD: There’s a lot of different things. When my dad started the brewery he did not know how to brew a beer either, he was a business man, an entrepreneur – He drank a lot of beer, I drank a lot of beer before I was here and then became trained by all the great brewers that we’ve had and have just learned to love the culture, and the people that I’ve worked with over the years.
PD: Well, back in September we got our families together at Wendi’s for dinner, and I think the moment she was comfortable with the idea of selling was when she found out that my wife’s maiden name was Fox.
WD: We [Wendi and Leslie] have the same maiden name! What are the chances?

CP: That’s serendipitous! So you’ve been mulling it over for some time – that’s good. Are your plans to keep BBC a family run business?
PD: Absolutely. I think that’s what was attractive to Wendi – that we were going to continue on as a family owned business.
WD: His wife Leslie will work here too.
PD: Leslie is going to be a big part of it. She has a background in marketing and is going to be spearheading those efforts including social media.

CP: What’s your previous business experience?
PD: Worked for a couple of technology companies in Denver. Great companies, but not the industry I wanted to be in. I was looking for something more adventurous, more entrepreneurial.

CP: Well this industry is both of those for sure!
WD: Every day is an adventure.

CP: Wendi, talk to me about the transition.
WD: Well, I’m going to be here to make sure it’s a smooth transition. Since they moved up here a couple of weeks ago Packy and Leslie have shadowed me and worked with different departments – they’re going to bartend and serve, brew with Ian [Larkin] and Josh [Harned]. Just this afternoon he was in the kitchen watching how things are made.
PD: We’re getting as close to the business as possible, to learn it all. It’s become apparent that Wendi is the glue that keeps it all together. She’s the ring leader.
WD: I’m a good ring leader and really proud of all of them [employees]. So for transitioning, November we’re focusing on front of the house, working with the servers and other managers. December we’re going to start working with administrative stuff –
PD: – and trying to convince Wendi to stay on after January in some reoccurring role –
WD: – I’ll sit here and I’ll drink beer! I’m happy for them and the opportunity to help them as they need it. If something comes up or if they want to go on vacation I can fill in.

CP: What are the plans for the expanding the brewery?
PD: The biggest opportunities for BBC are producing more beer and distribution. Today, the majority of beer produced upstairs is consumed in the restaurant. Just being Bend Brewing Company, the name speaks for itself – It’s synonymous with great quality, award winning craft beer. So taking that to an expanded distribution footprint is going to be huge for us.

CP: So a larger production facility?
PD: All options are on the table, but the main focus is expanded production and distribution and not changing the tradition of Bend Brewing Company. We’ll make a few improvements here and there, but overall, BBC will remain the same. I’ve reiterated to the staff that I hope everybody stays and is part of this new chapter. I don’t want to focus on what we can change, but rather, how can we make more Ching Ching, more Hop Head, that’s where are current focus is. We’re going to be taking Ian and Josh’s lead in terms of what they think is best of expansion. They’re the pros and we’re here to facilitate that.

CP: Any plans for making pub improvements?
PD: Eventually yes. We’ve talked about redesigning the front, opening it up with a garage door and possibly raising the back deck to make it level with the restaurant floor.

CP: Favorite beer?
PD: [Big sigh] I’m liking Ching Ching a lot! I wasn’t a sour fan until about 5 months ago. But now, every time I can get my hands on Ching Ching, I do.

CP: Well, that’s not going to be a problem now.
PD: It’s [Ching Ching] got such a cult following, when I look on social media there’s so many comments on Ching Ching, I’d like to make it available to the masses and have it on tap year round.

CP: There ya go! I like your plans so far. Now if you can just get the Lovely on year round too, we’d be set. Wendi, what do you plan on doing next year?
WD: Spending time with my family.
PD: We’re part of Bend now, we’ve got our season passes, photos taken and are ready to go!

CP: Yeah, well better not pray for too much snow because you’re going to be at the pub all the time now. Welcome to you next adventure!

The transition is in process and the purchase should be official by January 2016. By the sounds of it a bigger facility is in the cards but may not be happening in the near future as they are still settling in. I wish them the best and I’m sure I’ll be seeing them more often than not on Local’s Nights! I’m stoked for the new owners, Packy and Leslie Deeniham, as well as for Wendi. Wendi has had the distinct opportunity to have some great brewers pass through the doors at the BBC, let’s cheers to her selection of the new owners of Bend’s second brewery, The BBC! May they be as awesome as she has been and continues to be, and may the the tasty award winning suds keep flowing! Cheers!
Oh yeah, and please keep the BBC Nachos and Blackened Steelhead Caeser on the Menu! ;P